Architecture has always played a key role in defining cities, and Barcelona is no exception. Various landmarks and tourist attractions are scattered throughout the city, speaking of a rich 2,000-year-old history. Some of the oldest designs date back to the time of the Romans, while the modern era has contributed more contemporary creations.

One of the newest architectural projects in Barcelona is undoubtedly also one of the most exciting: the transformation of Plaça de les Glòries.

Catalan-Spanish urban planner Ildefons Cerdà, known for his 19th-century “extension” of Barcelona, Eixample, already saw the potential of Plaça de les Glòries 150 years ago. Cerdà originally envisioned les Glòries, the confluence of the city’s main streets (Diagonal, Meridiana, and Gran Via intersect), as the new centre of Eixample and the heart of Barcelona itself.

Modern-day alterations to the area include the emblematic elevated ring road and central park. The site has since been dominated and fragmented by road traffic. However, it was the history, strategic location and complexity of les Glòries that led to the next step.

In 2007 the Glòries Commitment was started, a collaboration between the City Council and neighbourhood entities. The main objectives were to: 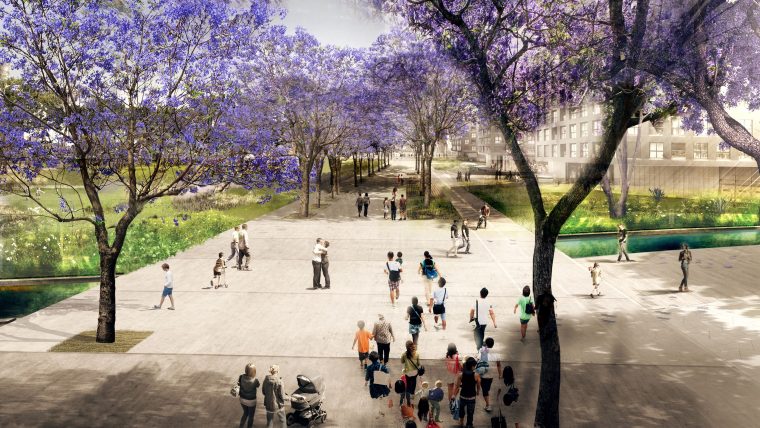 The professionals in charge

Architectural competitions are nothing new in Barcelona, which have resulted in several designs being added to the city, including Escorxador Park and urban transformations for the 1992 Olympic Games. The Barcelona City Council announced the commencement of the competition for les Glòries’ transformation in 2013.

Regarded as a highly successful endeavour, no less than 55 multidisciplinary teams submitted proposals. The winning proposal selected by the jury was “Urban Canopy”, designed by the French studio Agence Ter in conjunction with Catalan architect Ana Coello de Llobet. 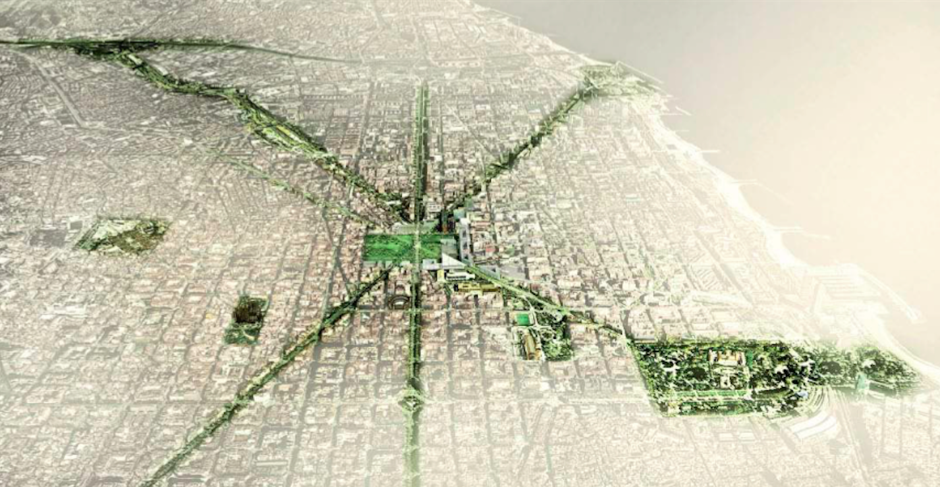 As one of Europe’s most densely populated cities, Barcelona is no stranger to the heat island effect, air- and noise pollution. These issues formed part of the city’s decision to roll out a re-greening program, with a mission to double the number of trees in the city, increase park space by two thirds, and give each citizen an extra square meter of green areas.

This urban plan, which is set to deliver 108 acres of new green space by 2019, could serve as a model for other cities. And it is a concept complemented by Urban Canopy, which is set to provide Barcelona with a unique public space of approximately 15 hectares.

Blurring the lines between square and park, Urban Canopy aims to create a hybrid ecosystem by developing a synergetic relationship between the subsurface, ground plane and green canopy. Biodiversity and climatic comfort are the dominant themes of the proposal, and new additions will include the creation of a continuous multipurpose surface to connect neighbourhoods, as well as the restoration of subsoil fertility to assist with the emergence of biodiversity.

In addition, les Glòries will also form part of the Diagonal Verde, a green corridor that will connect the parks Trinitat and Ciutadella and include the proposed Parc del Camí Comtal. 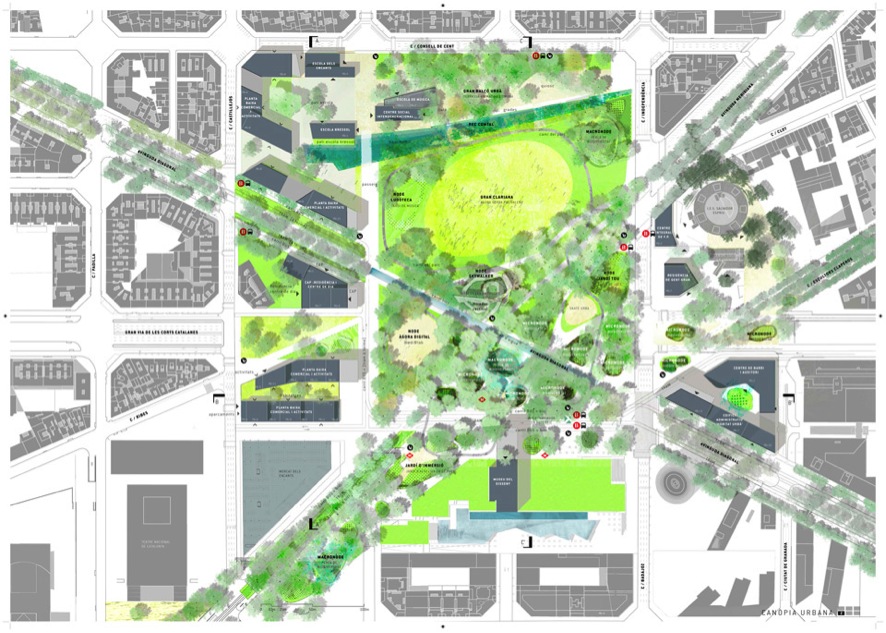 Stage 1 of the Urban Canopy project focuses on the 45,860 m² clearing known as the Gran Clariana. With a commencement date of March 2018 and a proposed timeline of one year, this zone will include the following:

Once work is completed on the two road tunnels carrying traffic from the Gran Via (due to be completed in (2021), the remaining stages of Urban Canopy will continue. This part of the les Glòries transformation will include:

The park’s perimeter will also feature numerous blocks of protected housing, as well as new municipal facilities for use by local residents. It is estimated that the future park will be accessible 24/7, although certain areas will have their own opening hours.

Not only will the transformed les Glòries provide the compact suburb of Eixample with much-needed green infrastructure, but will also mean a positive change for the city, including a likely rise in real estate values in the nearby areas.